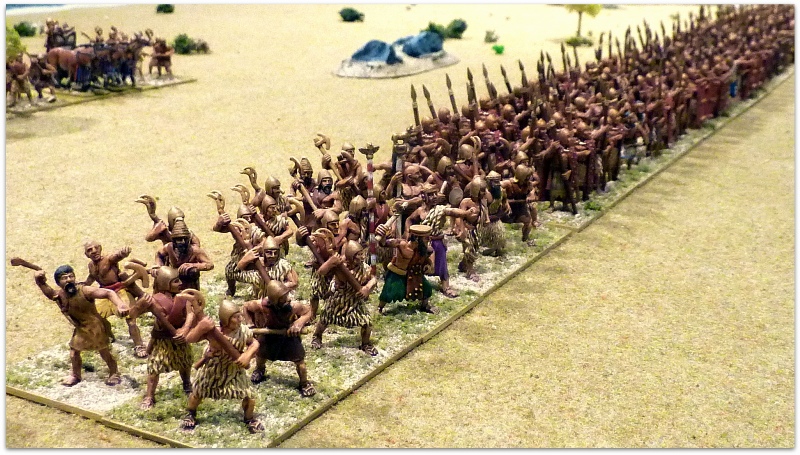 This post will provide the rules adjustments I'll be making to use with Peter Pig's Bloody Barons rules - Bloody Barons Sumerian Wars (BBSW).

The rules below are not final as any further playtesting will inevitably cause a rethink or tweak if it is required, but they do form the basis upon which I'm going to adapt Bloody Barons (BB) to the Sumerian Wars period. A number of ideas are directly taken from DASAQ but many other ideas are my own or knicked from one or two other sources. I have included the pre game events tables here for completeness as they are used together with the other rules when preparing for play using BBSW.

Where appropriate I've expanded some notes on my ideas for the rules and the reason for them so you can see where it is I am coming from with the concepts involved. The following rules amend or add to the existing Bloody Barons rules. All adjustments are shown on the playsheet.

It is important to note that we do not know with confidence the tactical certainties of how the Sumerians commanded their troops in battle and the tactical interactions of the various troop types. To create what I believe is a plausible tactical model for use with BB I have used my knowledge of similar formations of later times which were equipped with similar weapons systems, along with what known information I have on the period - this is not a precise science. Other people may share a different view of how these battles were fought and it is hoped my ideas and suggestions provide food for thought when constructing their own tactical model at the very least - use what you like, discard the rest.

I've included an integrated quick reference sheet based on the original Bloody Barons playsheet for use during play specifically tailored for BBSW so no reference is required between BB and my rules during play. The rules and playsheet can be downloaded for convenience. 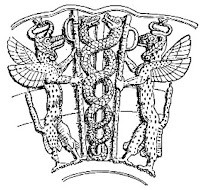 [Design Note - Battle carts are the major addition to the rules for the Sumerian period. Fundamentally they are treated as cavalry with a modest missile capability which operate in a swarm on the battlefield. Whilst they do need to close with the enemy battleline to use their javelins, they're still more mobile and faster than their enemies which provide them with the necessary 'agility' to make such tactics viable. Modern reconstructions have shown them to be far more 'nimble' than previously thought, with a turning circle similar to that of a modern automobile.  They can off course also charge into contact, but usually after their enemy is weakened or against dispersed or tactically disadvantaged opponents. The ability to allocate hits to enemy models provides for the abstract effect of reducing the combat capability of the 4-ass battle cart arrangement. Thus, when a wheeled cart unit is fired upon the normal rules for determining the allocation of hits is done. It will then be to the opposing side’s advantage to apportion losses to the two separate models in a wheeled cart unit as their fighting dice will now be reduced to d3 for all bases that will fight. It is worth pointing out that dice rolls can (and often will) produce extremes in combat capability – this is intended].

Command Vehicles
Leaders mounted on Straddle or Platform Carts can be used to influence control over skirmisher units. In this case, they may be considered a ‘main body unit’ and the skirmishers can roll for evasion measuring distance from this leader (see skirmisher rules above). Command vehicles are treated the same as Generals for movement (30.3) and loss (30.5) purposes. One command vehicles may be purchased for every 3 skirmisher units in an army. Cost 20pts.
[Design Note – commanders are given the ability to control skirmishers. Whilst we are not entirely sure of this battlefield function for leaders it seems reasonable in these organised armies with leaders of various levels of rank that such battlefield positions existed. It also adds texture to the battlefield utility of skirmisher elements in the game].
Wild Tribesmen
Wild tribesman that roll AP dice and have sufficient AP to close into contact with any enemy must spend 1 AP if they wish not to close into combat. However, when Wild Tribesman units wish to close into combat they only cost 1 AP to initiate contact (instead of the usual 2AP). Wild Tribesmen roll 1d6+1 (per base) in their first turn of close combat, in each melee to determine their Combat Value as long as they have not suffered any casualties (it’s easiest to add the face value scores of the dice and apply the total number of bases in the unit as a ‘+’ modifier). However, should they fail to break their foe or have taken losses, they are more likely to lose heart and only roll 1D6-1 for the second and subsequent round.
Armoured Cloak ‘Spearmen’
These troops may be taken equipped with Pikes as per rule 33A. No other troops may be ‘pike’ armed.
[Design Note – pike armed troops are not considered to be of the Classical Greek Macedonian style of pikemen. Rather, they are troops who have longer two handed weapons than the standard spearmen and are more akin to the long thrusting weapons of the Mycenaean Greek age. The existing BB rules account for pikes in a simple yet effective way and add a nice degree of tactical variation amongst troop types].
Massed Archers
Massed Archers may inflict causalities on any rank of troops.
Shielded, Protected and Unarmoured
A number of effects apply depending on whether a unit is Shielded, Protected or Unarmoured. They are shown on the playsheet and summarised as follows;
[Design Note – the grades of protection are another significant change to best be able to portray different levels of protection. By making the standard protection level of Sumerian 'battleline infantry' the 'middle position' we can nicely show the effect of unarmoured infantry, mostly skirmishers, and the strengths and limitations of the iconic shielded formations so often seen in Sumerian army depictions. I have chosen to show the main benefit of the shields as being one of high protection from missile fire, slowness in rough terrain and with a combat advantage when successful in melee ie when shielded units lose a combat we are representing the enemy 'breaking in' to the shield frontline and pushing into the rear ranks negating their shielded formation benefit.
Standards
Troops within 6” of an army standard may re-roll all morale check die rolls in a turn.
Generals (4” or less to enemy)
When rolling to see the effect on a general when he is 4” or less from an enemy unit (but further from any friends) always count the +1 bodyguard modifier.


[Design Note – these ally rules are based on DBM's ally rules suitably adjusted for BBSW. They provide what to my mind seem entirely plausible behaviours for armies of the Sumerian age].

Victory Points
As normal except as modified for terrain and events above. 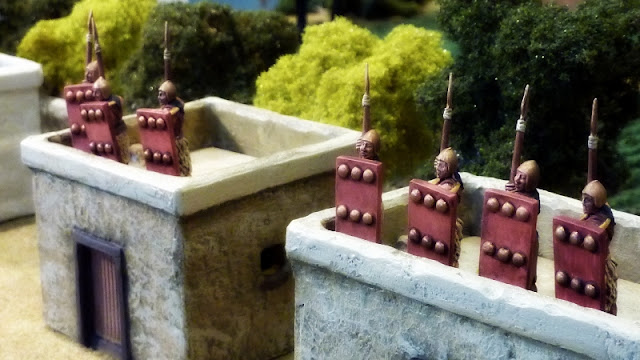 Scenery
Each player should take one field system as part of their initial selection. Each player may decide if irrigation ditches surround it or not. The defender may place fields wherever he wishes on the table. The attacker may attempt to move fields but may not move them towards his own side closer than the half way line. Fields are treated as worth 4 victory points for either the attacker or defender at the end of the battle. A field without irrigation ditches is treated as open ground. A field with irrigation ditches does not provide cover from missiles, costs 1AP for a front rank to move across, does not slow but does provide a risk of disorder after crossing it on a 3,4,5,6. Generals in Ass Carts are carried across ditches suffering no ill effects.
An army may choose one flank as one of the Great Rivers, Tigris or Euphrates, effectively closing off one flank.
Hills do not give victory points to the defender.
Either side may choose a shrine. Shrines are initially placed by the defender, however it cannot be set up further than 6” from the centreline of the table between the two forces. In his scenery phase, the attacker may move it but again it must remain within that central 12” of the table. It is worth 5 VPs for whoever owns it at the end of the day.
The Palace Treasury
Instead of purses in Bloody Barons, the Patesi (ruler) of a city spends silver rings on securing pre battle advantage in a similar manner. Each army has 70 rings to spend on the following areas.
Total number of rings (dice) must equal 70.
Roll for each ring spent on an Event. Every 5-6 on a D6 is a success. Check the net number of success on the table below. Attacker/Defender is as per the rules.